Opening to the Flow of Life with Sada Sat Kaur

Live kirtan. Come chant with us!

Through chanting mantra, we can align our vibratory frequency with that of the universe. Once we are in alignment, miracles begin to manifest in our lives. We open ourselves to love, healing and prosperity. Sada Sat Kaur is a kirtan rock star. Her feisty beats and energetic vocals will entertain and delight!

Join us to manifest miracles in your life! 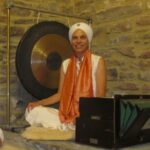 In yogic circles, Sada Sat Kaur’s name represents the alchemy of everyday custom turned into high art. For over 30 years she has toured the world, chanting mantras and singing kirtan in ashrams, concert halls, schools, public parks. In India, audiences have been known to flock to her as if she were the Beatles. “We play to crowds of 200,000 people,” she says. “They want to touch you and get your autograph. You go to these parks when it’s a Sikh holiday, and they hear that these American Sikhs are going to sing, and you can’t even see the end of the sea of people.” In 2000 she was hanging around the watermelon tent at a Summer Solstice retreat in the mountains of New Mexico when she fell into an exchange with musician and producer Jeremy Toback. “We just got to talking and Jeremy and I were like, `Let’s do an album.” The result of that chance encounter is Angels’ Waltz, a debut disc from a then 56-year-old homeopath and yoga instructor who also just happens to be a master of a musical and spiritual form. Angels’ Waltz was followed by two other successful CD’s: Shashara and Mantra Masala.

Today, Sada Sat Kaur can be found at her beautiful yoga ashram home, the Yoga Borgo, outside of Florence, Italy. 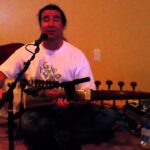 Wynne Paris is a new-age and world beat musician/producer with a special focus on yoga music and kirtan, the call-and-response singing of Bhakti yoga. His live performance combines Kirtan chanting, American music, world beat rhythms and raga scales. Wynne has taught and performed at many yoga and music festivals and gatherings around the country.  His spiritual background and teachers include Yogananda, Neem Karoli Baba and Mata Amritanandamayi. He has been a professional musician for over 30 years and has been on the kirtan path since 1994. Some of the musicians he has recorded or shared the stage with include Krishna Das, Guru Ganesha Singh, Snatam Kaur, Bhagavan Das, Dave Stringer, Sada Sat Kaur, and more.

Wynne is co-founder of the Lovelight Festival, an annual yoga and arts festival in Darlington, MD.